It is not enough that I should serve God by myself: I must help the hearts of all to love him and the tongues of all to praise him.

We leave the hostel and walk toward the Cathedral and then cross the River Cidacos, which hopefully will be flowing. About 150 meters after the river we turn to the left onto a paved highway which leads to the town of Azagra (LR-486) and the cementery of Calahorra We follow it until it takes us to a tunnel under a train line. About 150 meters after the bridge, we leave the highway and take another paved road to our right, which meets up with the train line. As has been happening repeatedly and will continue to happen in future stages, the train line keeps us company from town to town.

Up to Canal de Lodosa waters we keep on the road, leaving the railway behind. Fork: we take left. After 4.5 kilometres of paved road, next to a demolished house, we take the dirt road to the right. We always walk straight on, without taking any diversion of the different ways that it shows. We come close to the railway and we will follow it in parallel till reaching Rincón de Soto. We pass a railroad crossing that remains on our right, continuing straight ahead until we reach a second railroad crossing at which we cross. In 100 metres we take the path to the left and we will continue straight ahead, parallel to the railway line, up to Rincon town.

We enter Rincón del Soto and cross the railway line to reach the Avenue of the Rioja.  From there we go straight on before turning right to reach the City Hall.

We leave Rincon be means of Avenue Prince Felipe and we come to an intersection with a railroad crossing. We don’t cross but we turn left onto Alfaro River Avenue. The street turns to the right and directs us to a road bridge which rises over an irrigation canal. We continue straight on the asphalt, keeping the canal to our left.

We pass under the bridge as we continue to walk parallel to the canal for a short while. The road, Camino del Esportal, leads us for 6 kilometres along the train line, parallel to the   N-232. We walk straight ahead on the same road. Following a curve of 90 degrees to the right, we go up to cross first, a small bridge over an irrigation canal, then the train tracks before finally reaching the N-232, which we will follow to our left until we reach Alfaro.

As we walk toward Alfaro, we will come upon the chapel of Pilar, impressively set on a small promontory over the highway. We enter the town and come to a roundabout, where we keep going straight so that we cross over the Alhama River and arrive at the bus station and then at the Plaza de Toros. We walk along the edge of the Plaza, keeping it to our left. Following the avenue which turns to the right, we reach a tree-lined promenade, which appears on our left. This is the Paseo de la Florida, where the pilgrims’ hostel is located.

ALFARO: The Colegiata de San Miguel Arcángel (16-17 century) is a majestic sight, with its more than 3,000 square meters. It is worth visiting the interior of this building, a national monument since 1976, with its baroque main altar (18th century), another altar of the same period for the Sorrowful Virgin, the sculpture of the “pilgrim Virgin” – tribute to the many pilgrims who pass through this city of La Rioja – and the Gothic Christ in the chapel of St. Joseph. In another church, that of San Francisco, is kept a large baroque canvas depicting the apparition of the apostle Santiago in the battle of Clavijo. Depending on the season, it will be easy to distinguish storks crowning the most important buildings: the city is well known as “the paradise of storks”. Alfaro (10,000 inhabitants) welcomes pilgrims with its restaurants, pharmacies, health centre, supermarkets, banks, and an office of tourism (Plaza de España, 1. Tel: 941 180 133. Open Tuesday to Saturday, morning and afternoon; Sundays, morning only).

Notes: The goal is not to gather facts about Jesus, but “to see Thee more clearly, love Thee more dearly, follow Thee more nearly.” Again, let us not forget the “introductory prayer,” which is the ultimate fruit of the entire experience. In this “second week” Ignatius introduces another kind of prayer: the contemplation of the Gospel mysteries.

Contemplative prayer. Ignatius asks us to “exercise” ourselves in contemplative prayer, a kind of imaginative prayer where all our senses are involved. Here is a little guidance: «Read the text of the story and then leave the text aside.  We begin by slowly picturing the scene as completely as we can.  Where is it happening?  Notice all the things in and around the scene.  Who’s there?  What is everyone wearing? How hot or cold is it?  What smells come to me?  I then enter even more into the scene, by becoming a character in it.  I might just let myself be a member of the crowd or I might become one of the principal characters in the story.  When I feel I’m in the scene, I let the story happen, and go wherever it goes.  Once inside the scene, the words and actions are not merely a videotaped replay of the text.  Inside the scene, I can back up and fill in how the scene began, I can let what is revealed to me be played out in the words and gestures of the participants, and I can speak or simply experience my own reactions.   The details of the text cease to be important as the experience of the story moves my heart.  Finally, I would end with a prayer, speaking to Our Lord, heart to heart, friend to friend, in whatever way comes to me, expressing my gratitude for the graces I have just received.”

We begin this type of exercise by contemplating the mystery of the Incarnation. Don’t be disappointed if you find this kind of prayer somewhat difficult: we are asked to pray from our own life, so everyone has their own way to God! But Ignatius finds this kind of prayer very useful, so try it!

Grace: We ask for a lasting appreciation of the miracle of the Incarnation through the person and response of Mary and Joseph; we beg for the grace to believe and accept the almost incredible good news that Jesus is among us and how that good news affects us. A deeper gratitude for the wonder of God being born in human form.

Reflection: Focus today on the miracle of the Incarnation, trying, as the cliché goes, to, “keep it real.” The Nativity crèche in a church typically figures a cherubic Jesus surrounded by clean, smiling at his parents, shepherds and kings. In fact, tradition tells us that Jesus was born after a long, uncomfortable trip in a place that must have been neglected and filthy. His parents, exhausted from travel, likely felt desolate and worried to deliver a child in an unsanitary, unfamiliar place, without the support of relatives. The Prince of Peace has come among us, but not in a way that any of us would have imagined. Feel all the same travails that you do as a pilgrim-traveler: will I get lost? Will something go wrong en route? Will adequate accommodation be available? What if I get sick? But now multiply these a thousand times, imagining yourself alongside a loved one with child.

Ignatius invites us to: «see Our Lady, Joseph and the infant Jesus after his birth. I will make myself a poor, little, unworthy slave, gazing at them, contemplating them, and serving them in their needs, just as if I were there, with all possible respect and reverence… Consider what they are doing: for example, journeying or toiling, in order that the Lord may be born in the greatest poverty; and that after so many hardships of hunger, thirst, heat, cold, injuries, and insults, he may die on the cross!  And all this for me!

Matthew 1:18-25. Contemplating the mystery of the Incarnation, we enter into the feelings of Joseph and his struggle with law and love.

Luke 2:1-20. She gave birth to her first-born son and wrapped him in swaddling cloths, and laid him in a manger, because there was no room for them in the inn. Present with inner peace at His birth, I receive Jesus with joy and gratitude as the Father’s gift to me and to His people.

Closing Colloquy: “Finally, I end with a prayer, speaking to Our Lord, heart to heart, friend to friend, in whatever way comes to me, expressing my gratitude for the graces I had just received.” Ending with the Our Father.

No difficulties for cyclists 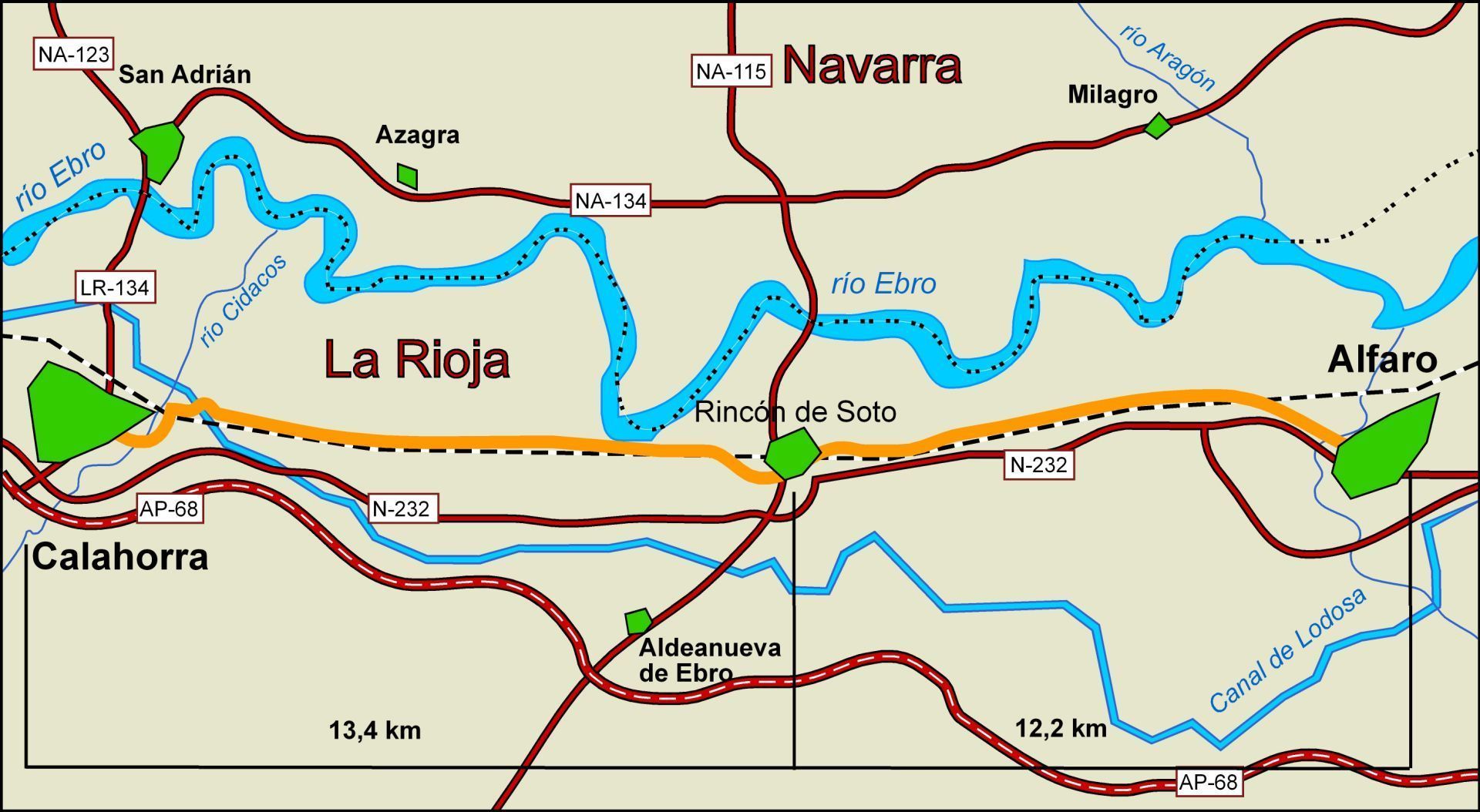 The weather in Alfaro